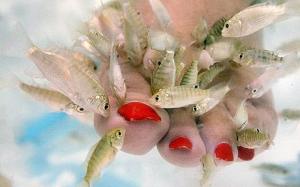 A couple of years ago tiny carp became all the rage for their toothless approach to nibbling off dead skin as a matter of treatment for those in search of the ultimate spa pedicure.  The fish, naturally found in warm mineral pools in Asia, weren’t the concern nearly as much as the bigger picture.

Sure the fish eat and defecate in the water they call home while tending to the unwanted callous or dry patch of skin; however, the real culprit is the multiple usage of the pool by one spa client after another.  Fungus, bacteria and fluid born disease are all potentially present.  While this may not be an immediate threat to some, those with low immune function, diabetes, cancer patients and clients who are pregnant or nursing may all be at risk.

Scientists began to get indications of the kinds of microbes that could be bathing fish spa patrons’ feet in April 2011, when British authorities investigated a reported bacterial outbreak among 6,000 Garra rufa fish imported from Indonesia to British salons and pedicure spas. Tests revealed the fish had been infected with Streptococcus agalactiae (group B Streptococcus), bacteria that can cause pneumonia and serious infections of the bones, joints and blood in people of all ages and life-threatening infections in newborns.

The bacteria findings appear today in Emerging Infectious Diseases, a journal published by the federal Centers for Disease Control and Prevention in Atlanta, which has been monitoring health effects associated with fish pedicures.

More than 10 states have banned the practice for a variety of reasons, the CDC said, including the inability to sufficiently clean fish pedicure tubs between patrons; the impossibility of disinfecting or sanitizing live fish; regulations that specify fish in a salon must be kept in an aquarium, and a humanitarian justification that to entice the fish to feed on dead human skin, they must be starved “which might be considered animal cruelty.”